Its been a busy last year, between buying and building up the Jeep I am about to introduce you to, spending time out camping, then selling and buying a house.  I know, I know, its no excuse...

Anyways, after last blog post indicating the green Jeep had had an accident that wrote it off I also mentioned I had found a new vehicle.  It was a local 2008 Jeep Wrangler Unlimited Sahara in Red Rock Crystal Pearl paint.  It was a single owner lady driven, purchased originally in my hometown.  It had never been offroad, and still had less milage than the outgoing Jeep.  Also it came with a soft top and bike carrier which I felt I could flip for a few bucks. It was also, by a not insignificant margin, the absolute cheapest Unlimited Wrangler in the area. 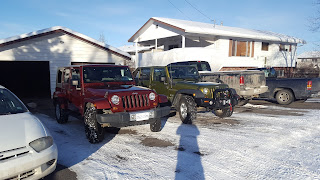 There were bad points as well.  I wasn't super keen on the color, the interior was in rougher condition than the green Jeep, the transmission felt weird/different, also there was a blown intake manifold gasket.  It also smelled like it had had a smoker owner (not necessarily smoked in, at least not much or without the windows rolled down).  When I viewed the Jeep, then again when picking it up it was in the dark so I later discovered in the light paint was pretty rough by my standards.

I was able to get the seller down a bit due to the manifold gasket which she was unaware of.  She also just wanted to offload the Jeep as her company had leased her a new vehicle and she lived in a condo so storage was a concern.

Once I took possession the first task was the manifold gasket replacement.  This was a relatively easy task technically speaking with lots of resources online.  Its a little awkward and took the better part of a day being pretty methodical. 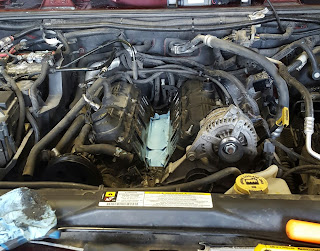 After the Jeep was properly roadworthy again it was time to give it a thorough clean and detail to refresh it and bring it back as close to showroom as a 9 year old vehicle could be. I like doing this to all my used used vehicles as it makes them feel more like yours.  For this I went to visit my parents who had the heated garage and cleaning/polishing equipment.


Dad giving it a thorough wash. 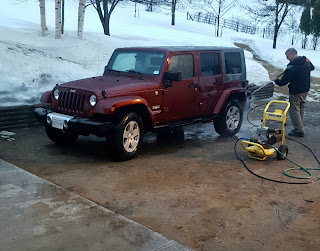 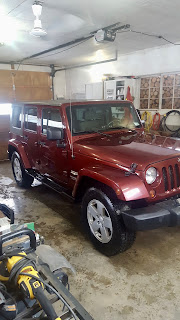 Freshly washed pulled into the shop 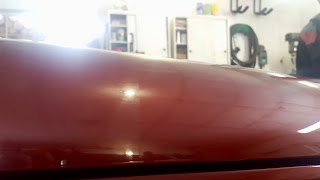 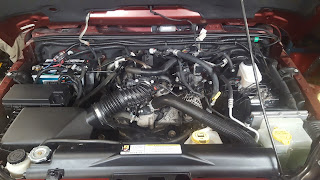 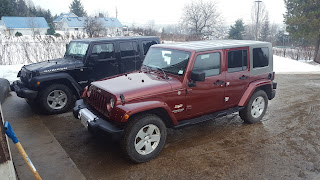 At this point I was feeling good because I felt we had increased the value of the Jeep to the point I had gotten a steal on the purchase price.

I'll save the details of the evolution of this rig over the last year for its dedicated page so please check it out.  Overall this incident didn't set me back in money, and I was actually able to pick where I left off and slowly progress on the build of up my dream Overlanding Jeep.
Posted by Okanagan Overland at 11:31 No comments: