Earlier this year, at the end of June, I attended my second Northwest Overland Rally in Plain Washington.

The first time I attended this event back in 2014, despite having a crummy first night (due to not knowing anyone, cutting myself on a beer bottle, and finally turning in for an early night only to have the neighbor adjacent pumping music into the early hours of the morning) I ended up having a great time, met a few cool new people, and got inspired to improve my setup.  It was this event that inspired me to build the trailer as well as was this event last year that I aimed to have the trailer done by, although in the end I didn't end up going. 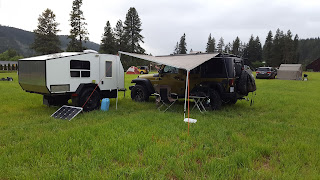 This years event was quite different.  First off I rolled in quite confidently, with my Jeep and trailer which now more closely resembled something that would be considered "overlanding".  I swear, and I am not joking, the last time I was there I was the only person in a 4x4 vehicle that was sleeping in a regular dome tent.  I felt out of place amongst the sea of roof top tents, wall tents, pop-up campers, and extreme motorhomes.  Actually in contrast this year it was not uncommon to see people in run of the mill tent trailers, trailers, and tents.   If I'm honest I didn't mind that it diverged from the more hard core to the more affordable setups since it still is a great group of people with common interests.

Another major difference this year was the size, in 2014, there were two parallel events being run out of the same farmers field, one was the Touratech Rally for adventure touring motorbikes, and the other being the Northwest Overland Rally (NWOR).  This year the field we were using previously was completely taken over with bikes and the Overland Rally was in a field adjacent.  I don't have the greatest memory, but I want to guess there was maybe double or more the number of vehicles as part of the rally this year? This made me extremely curious as to what the event last year looked like that seemed so highly rated by the attendees on forums I frequent.

Here is a great youtube video created by Oregon Trail Off-Road that shows you the scale of the event, my setup can be seen at 0:15: Video

Another benefit to the layout this year was that there was a more purposeful and permanent off road course, as well as the ability to host other education sessions in the shade of a section of forest.

The dynamic of this years event was quite different for me, I wasn't unprepared as a I was last time but I also didn't feel as social and didn't immediately recognize anyone I knew when I got there. This meant for me, each night after the campfire, I went back to my site and just hung out, whether it was reading a magazine, watching a movie or just going to sleep.  In 2014 since I was thrown in with a tight knit group of people I just asked to join their campfire and listened to them tell stories for hours.  Of coarse I could see there was the odd group with a campfire this year but I didn't feel the urge to invite myself over.

Some of the aspects of this years event were similar, there were still great people, great vendors and great prizes.

As always the people at this event are nothing but great I had several great conversations with people around the event.  It is easy to strike up conversation when there is so much to talk about such as unique setups or asking for candid review of maybe a product you had been eyeing up and looking to purchase.  It seems like every one is happy to show off their setups or come and chat about yours. 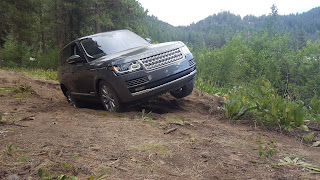 I also had particularly interesting conversations at the technical course talking to the Land Rover instructors and they pushed the new Ranger Rover diesel harder than 99.9% of the people that will end up buying them. It was also interesting to learn from these guys how they were guiding people through the course with their own cars. Its funny to note that at one point I swore that this location was the congregating  point of Canadians as both instructors, the rally organizer, and a few others from here in BC were all discussing the vehicles going through.

While I missed not having some vendors at this years event such as Mountain Khaki who I got some clothes and a canvas bag from last time, or AEV who I got to drool over their Hemi and Brute conversions, there were still as number of interesting vendors in attendance. 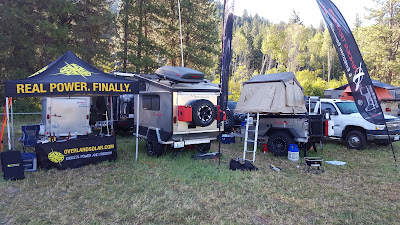 The most notable venders in my mind were VMI Offroad, who had a line of really cool, all welded aluminum off road trailers.  These included both cargo and camping. The next was Jeep Kitchen a Vancouver BC based business that has a very nice very nicely designed kitchen system designed for the back of a Jeep JK Unlimited.  It is high quality with amazing fit and finish, including details to ensure it is completely rattle free.  There were other iconic off road brands such as ARB, and Warn. The Warn rep was also the one hosting winching seminars that were very informative. I also had a great conversation with the guys at Nitro gears asking for their advice on my eventual Jeep re-gear.  Also Kargo Master, the company that builds my rack were there so I got to see and chat with them about the new line they have, as well as tried to sneak in a few of the 'improvements/modifications I had made to the older (now basic) model. I tried to be good this year and not buy too much stuff but when I saw that they had a RAM mount dealer I knew I had to pull the trigger on an aluminum long arm (ok, I know it only about $20 but I love this system as you can see in my previous posts!).

I remember my first night of 2014 around the camp fire, someone leaned over to tell me that they give away some good prizes, and on the last night they even give a way a complete set of tires! This year lived up to that same expectation, while I didn't personally walk away with anything it seemed like I was the minority.  They gave away at least 3 or 4 winches, the set of tires, some really cool portable firepits, rc cars, tons of offroad accessories, and finally piles of swag. Next year I'll win something, or thats what I will keep telling myself.


Another part of the event that I really like and highly suggest you take advantage of is one of the trail rides.  This year they were lead my members of Northwest Overland, a forum with a similar name but no official connection to the rally.  The tame trail run which I have done both years, is about a 3-4 hour round trip that takes you up to a fire lookout which by definition has amazing views of the area.  I felt sorry for some of the people with roof top tents, awnings and other stuff strapped to their trucks who were not ambitious enough to break camp to go explore.

That brings me to a little word of wisdom, and I don't mean it to be a way of telling you how to run your life.  But if you are just thinking of getting into camping or overlanding and are starting out with no gear keep in mind what you want out of it, do you want to be able to go some place cool and setup a base camp but still have easy access to your vehicle, or do you want to be on the road each day camping at different spots each night.  This should seriously be a main consideration for your setup.  For me a trailer made the most sense since most of the time I go to a single location to camp and explore around.  In a perfect world I would have a roof top tent (RTT) as well but for now this covers off most scenarios.

All in all this is an event I would highly recommend, I can't wait to make it back next year and see how it has evolved yet again. My tips for anyone going are be prepared for any weather.  Its fairly high in the mountains so while the days are warm the nights can get quite cool. Also like this year it rained for a few hours quite heavily I didn't bring waterproof shoes so I had a tough time getting everything to dry out once it finally cleared.  Last year the report was that it was unseasonably warm and that seemed to be the biggest complaint, so just plan for everything. Since you are camping in a farmers field I also recommend a good inflatable mattress if you will be sleeping on the ground as it quite lumpy.

I'll leave you with a few more pictures. Hope to see you at the event in the future! 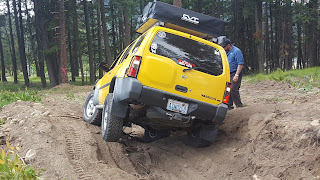 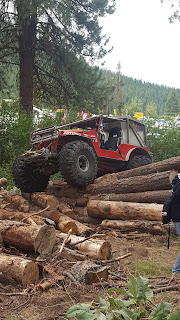 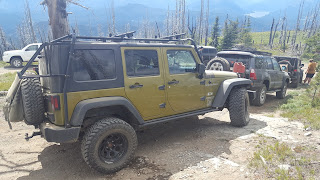 Posted by Okanagan Overland at 13:16

Email ThisBlogThis!Share to TwitterShare to FacebookShare to Pinterest
Labels: Trip