At almost 1 year since embarking on the trailer project it was time to revisit it and take it from just usable to one step closer to 'complete'.  The next most important thing for me was the electrical system and interior lights. 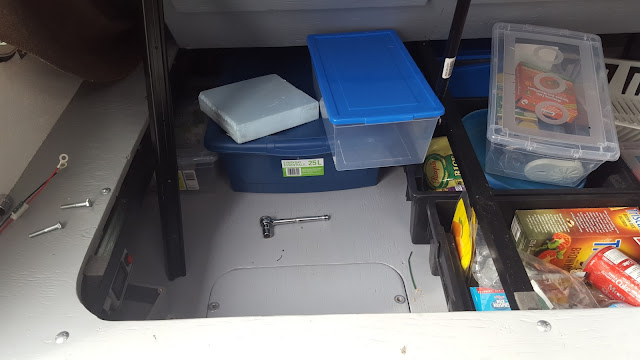 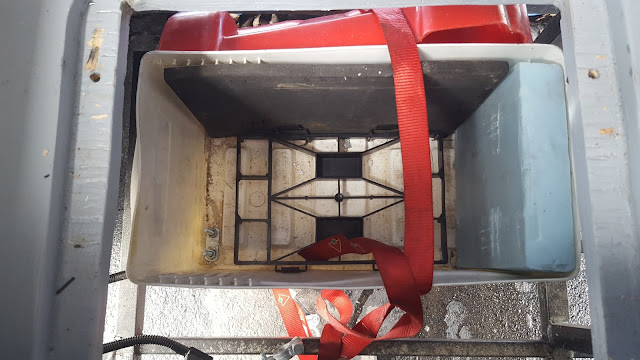 I attached a battery box I had inherited to the bottom rack of the trailer using some U bolts. The box is a little larger than needed which allows for the bolts as well as potentially could accomodate a larger battery in the future. 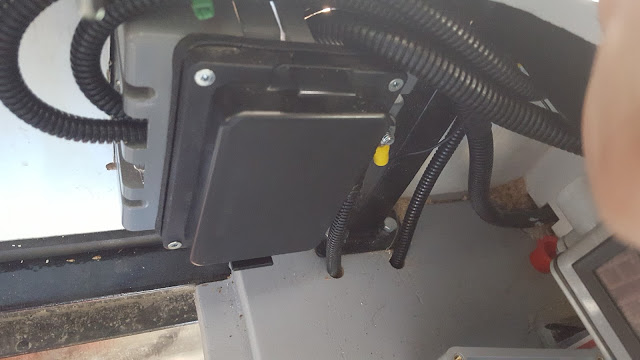 Next up was the Fuse panel, I mounted it to a stove/dryer outlet box. In hindsight I should have paid more to just use a large junction box and hidden it strictly in the storage area. 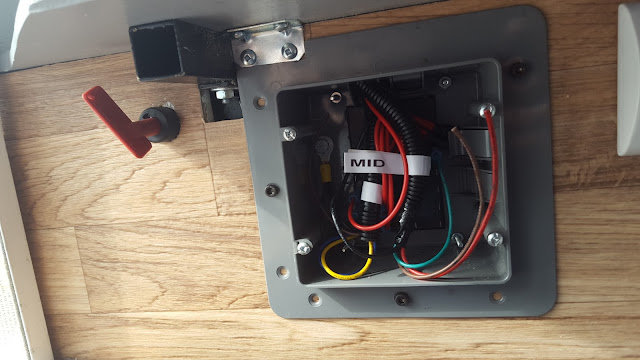 The front side of the fuse box. There are 3 sections of wiring, the Front, Middle and Rear of the trailer. I have these each as separate looms of wire so I could reuse the colors. Note the master kill switch on the left. 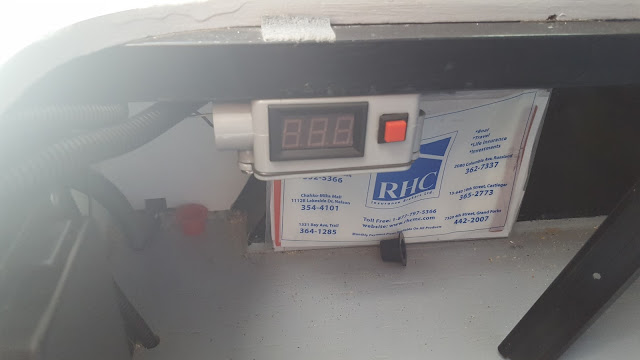 Over the build of the project I was slowly acquiring parts such as this volt meter. I used a small junction box and the button out of the trailer lights (had a button and battery to sample the functionality).

Over the last half a year or so I have been watching out for deals on RV lights, I was able to find
several options at Princess Auto, one was a low profile dual RV light with pre-installed LEDs, the second was a couple of wall mount lights.  I bought the dual light to use as the main light to illuminate the trailer. The second, wall mount, lights came really cheap at 10 bucks each.  They are a brushed nickel finish with a marbled frosted globe. The benefit to these lights is that they actually swivel around and can be used as a reading light. I thought that these two lights would work great at the head of the bed.

Originally the plan was to keep it simple and once I had lights for the head of the bed use vinyl wire coverings to simple rout the wiring across the rear wall to the lights. My concern was that since these lights I had chosen had a good amount of weight to them screwing them to the 1/8 inch plywood wouldn't quite be enough.

My solution was to grab a few supplies and try my hand at a woodworking project to build a headboard.  The great thing about this was that I could also introduce some warmth to the interior of the trailer to take away how sterile the brilliant white walls make it look. As an added benefit this was a really cost effective option.  I think with the pine, the 1x2s, some trim, and some staining supplies I was still into it less than $40.  By contrast, if I went with my original plan I would have to by the vinyl wire tracks, then still devise something to give extra strength to the mount of the lights.

I had some scrap (crappy) eight inch plywood used for the shipping of my aluminum sheets, I then also bought some knotty pine wall panelling and a few sticks of 1 x 2s. I was able to make a very simple headboard which is less than an one inch thick to preserve the length of the bed.

Originally I purchased a light stain but upon first application it came out really red and just didn't look as I had envisioned.  The next day I looked at a different store for the original color I had in mind.  Luckily they had it and the store associate confidently told me I would have no trouble covering up the original color. Also that second day it struck me to go for a rustic, distressed look.

When I got home I got out the hammer, some chains, an awl, some screws, a knife, and last but not least a torch.  First I torched the wood to add some darker accents, then I took the chain and hammer to add some indentations, I then stabbed the wood randomly with the awl as well as added some artificial cracks. Using the knife I chipped of some of the edges of the wood. And finally using the screws I hammered the threads sideways into the wood for an barn-board look.  I then proceeded to stain the wood darker. 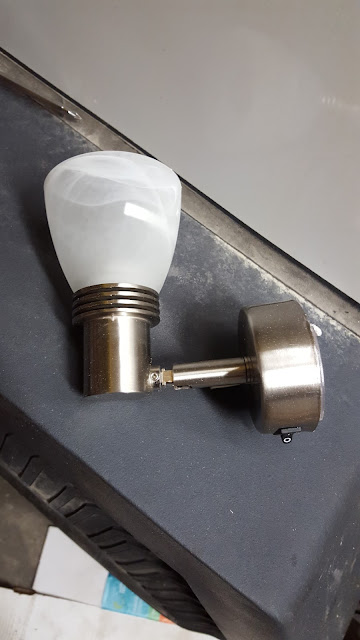 The lights I got cheap at Princess Auto 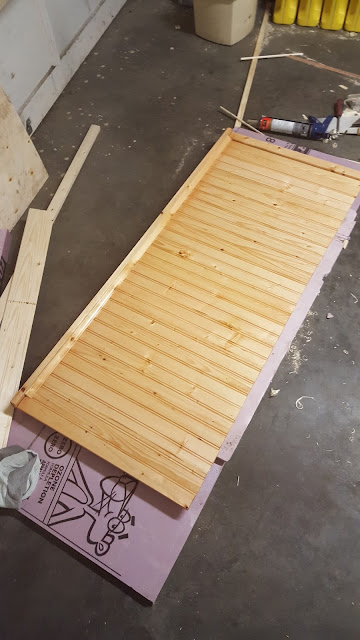 Headboard built and first coat of stain on. I didn't really like the color. 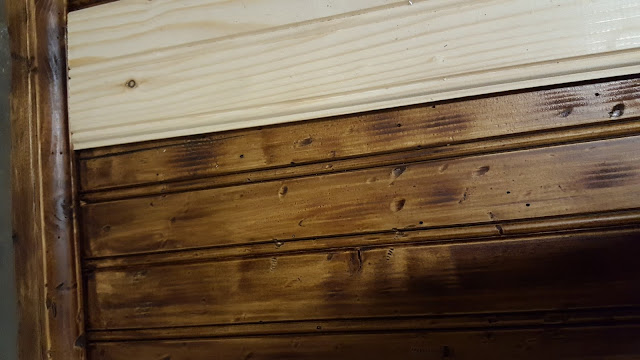 The New stain, and distressed detail, compared to the unfinished wood. I ws really surprised at how fun the distressing process was! At the same time I also whipped up a magazine rack and finished it similarly, it still hasn't been mounted. 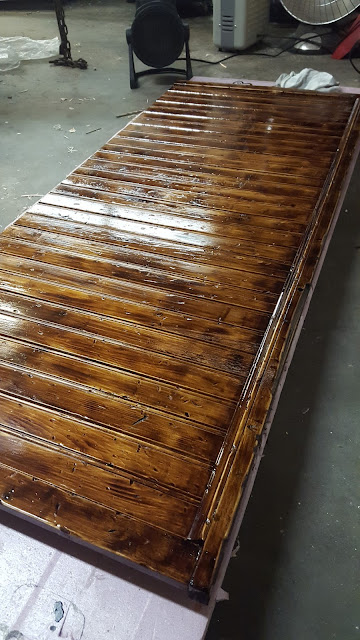 Whole headboard with a fresh coat of stain. 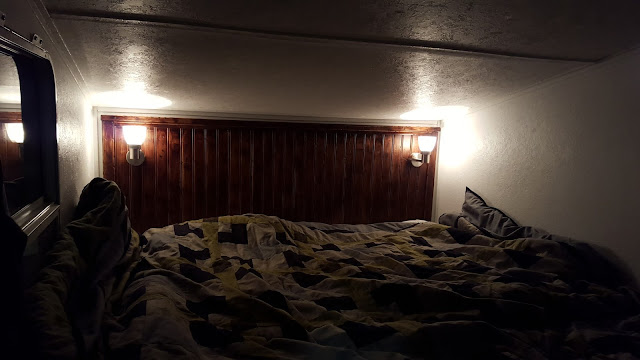 Installed with lights on! I have received some replacement LED bulbs to replace the halogen ones that the lights came with.  They are not quite as bright but but will do fine even for reading.  I think I will buy another fixture or two before they sold out so that I have a spare if needed.

I was lucky enough to receive a haul of Canadian Tire gift certificates Christmas which I used to buy an AGM battery.
Posted by Okanagan Overland at 22:55

Email ThisBlogThis!Share to TwitterShare to FacebookShare to Pinterest
Labels: Trailer