This last week I spent a good chunk of my evenings dropping the fuel tank from my Jeep in order to fix a dent in the skidplate. I noticed this the other day while replacing my wheel bearing and a U-Joint. I don't know exactly how and where I got this dent. 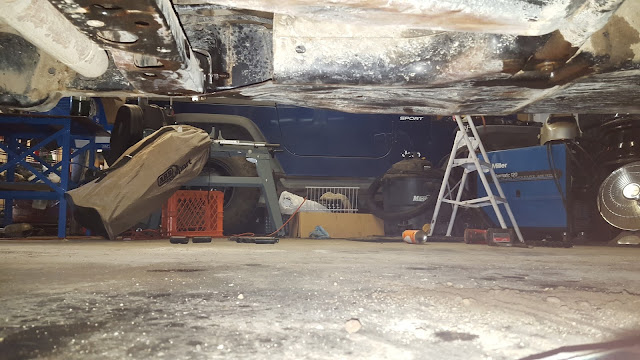 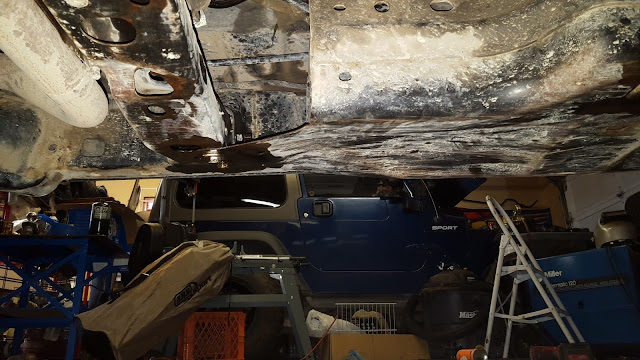 Now my reason to proceed with this fix was not for aesthetics, or fuel capacity.  Rather I was worried that the dent was putting unnecessary strain on the plastic tank that could potentially cause a failure at an inopportune time.

I had done a little research online and many people seem to have had luck with pulling the skid off while holding the plastic tank in place with straps, this would mean not needing to disconnect any fuel lines. Others seemed to have an easy enough time disconnecting the fuel lines and connectors to the fuel pump, then dropping the whole tank and skid as a unit.  I decided that this second option was how I planned to proceed.

I started off by jacking up the rear of the Jeep and setting the axle on some jackstands. I then removed the passenger side rear wheel for easier access to one of the rear skid bolts, and visibility to the top of the tank.

I then began removing the transfer case skid, 3 bolts came out relatively easy with the assistance of some penetrating oil and impact gun. The last bolt which is the one into the gas tank skid was a little tougher and broke off the captured nut.  I figured I could leave it hanging until I dropped the tank.

Since I didn't want to break any bolts I worked them carefully with the impact out and in several times with penetrating oil. At this time I also placed the floor jack toward the rear of the tank and began fully removing the 6 rear bolts. I left the front 2 bolts which are in the crossmember loose but still installed.

I began starting to remove the lines to the rear of the tank, there are 3 or 4 connections on top of the fuel filler neck.  Most of these connections come off easy simply pinching the clips and pulling apart. One connection however was quite tricky, I believe it usually requires a special tool however I was able to disconnect the line with a small screwdriver. I should also note that it was easier to disconnect the other end of the line away from the tank itself. At the front cross member, transmission support, I disconnected the fuel supply are return lines. 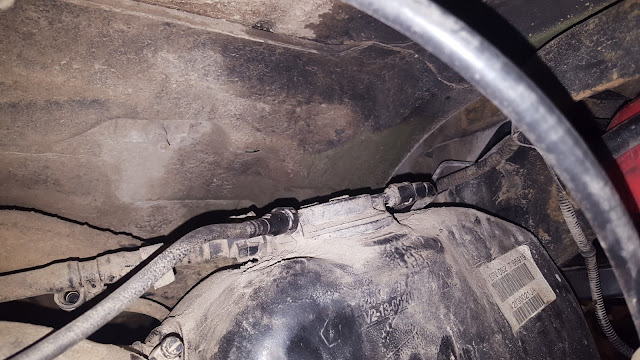 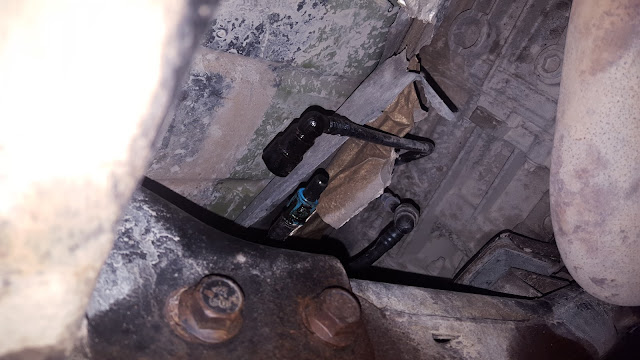 The last tricky part was disconnecting the wiring.  For this I slightly lowered the tank with the floor jack now supporting it.  I then had to dig around the connector clearing the substantial sand and mud that was covering it. 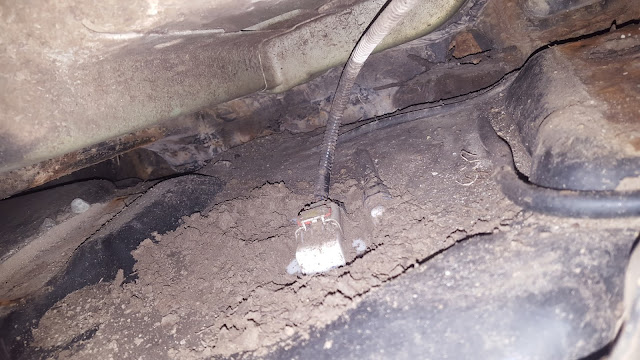 Once the connector was off I was able to drop the rest of the tank and skid to the floor, however I did have to wiggle and jiggle it to clear the trailing arm bolt. I then used my hand to lift the front of the tank and removed the other two bolts, allowing the tank to drop to the floor. I could then drag it out from under the Jeep.

I pulled it out I was able to lift the plastic tank from the skid. I scraped as much sand and mud out of the skid as I could, as well as cleaned off the top and side of the tank. I didn't spend all that much time on cleaning the tank as I knew that it will all just come back. All in all I figure I got about 10 pounds for dirt off the tank and skid.  To remove the transfer case skid I used a hack saw to cut about half way through the bolt, then used the impact to snap it off. Luckily I had a spare bolts from the set of takeoff suspension, and a nut from a second JK bumper I had lying around. 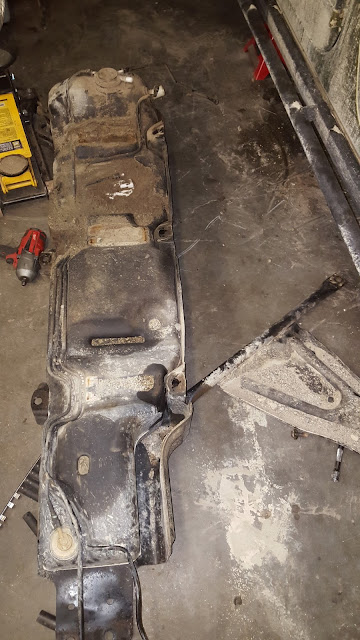 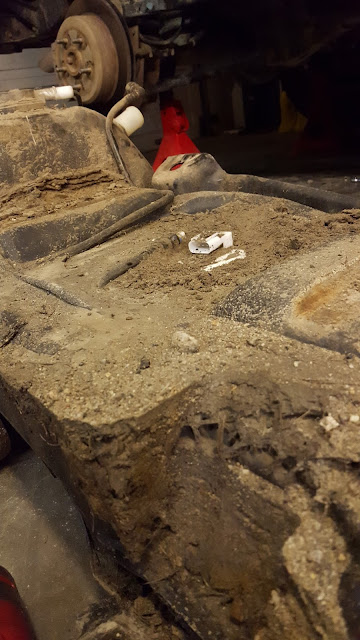 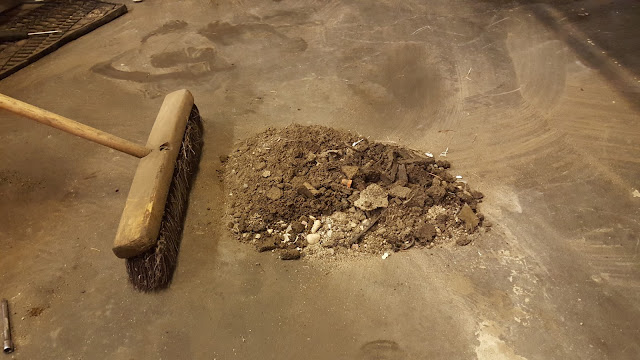 Once the skid was cleaned out I pounded out the dents, then took it out to the yard and hosed it off.  I then let it dry overnight and gave it a coat of rust paint to help myself feel better about doing this partially as preventative maintenance.

As they say, "installation is the opposite of removal" and the same definitely applies to this. I lifted the tank and skid back into position and lightly installed all the fasteners. I then took each out one at a time, and added Loctite. Finally I reconnected all the previously removed hoses and wiring. The next morning I did the test run using my morning commute to work, everything worked flawless.
Posted by Okanagan Overland at 00:09