As you can see in my buildup of this Jeep there were a lot of thought put into the modifications made.  It was nearing my vision and I couldn't have been happier with it, recently it had just received new gearing, the ARB bumper I salivated over for years, and a quality Warn winch.

One beautiful mid January day I decided to the take it out for a drive.  Since it was the middle of winter and few roads were plowed I decided to go down the 201 (Okanagan Falls) Forestry Road from up near the Big White Skihill turnoff to Penticton area. As a major road you can always count on it being well plowed.  My goal of the day was to see if we could get to Idleback Lake, a place I had been meaning to explore for a while.  I set off with some snacks and my brothers dog.

The conditions of the road was compact snow, I knew I had to take it easy, but the Cooper Discovery A/TW tires seemed to have a good bite.  We made our way down the road and even took a few spur roads just to GPS them for later reference.

Eventually we made it to our destination without issue, so parked and got out for a walk about.  Its a pretty neat area, but like the accessible rec sites around here I imagine it must be crawling with people in the summer.

Once the dog had her run and I snapped a few pictures I decided our days mission was accomplished and to head back home.  I contemplated trying to exit via Penticton, but thought it would be more fun to leave the way we came. 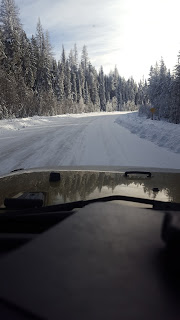 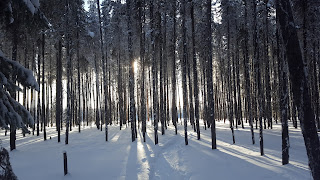 About an hour later (if memory serves me correctly) we were nearing the last intersection prior to rejoining highway 33 to take it down to our home.  This intersection was a 2 way stop on the 201 side, with McCulloch running though without a stop sign.  For the past few minutes there was a big one ton pickup following me.  I contemplated pulling over but with no great places to go and him not gaining on me I kept my pace forward.  Being wary of the road conditions earlier I monitored the intersection to see if it had been sanded, you could see sand that had been tracked onto the 201 from other trucks but nothing specifically laid out for this stop sign. I slowed myself as I approached the intersection but then to my surprise I seemed to have misunderestimated the iciness of the road.
As the ABS came on the dog being curious stood up on the console to check to see what was happening.  Looking left and right planning my options should the electronics not find enough grip I found myself gravitating to the right of the road with the expectation that I will turn right into the correct lane should I blow the stop sign.  From over the top of the snowbank about this time I also saw that there was a blue Rav 4 approaching, I thought there would be a very good chance we would collide, however it happened so quickly I wasn't actually sure how fast they were going.

In the milliseconds that all this occurred there was eventual success my the Jeep to stop me.  Now I don't know if this was just before, at, or after the stop sign, but either way I was not in front of the Rav.  I didn't have much time to recover from this adrenaline rush because it was then that I noticed the honking coming from behind me.  I quickly got the Jeep in 1st, and maybe got the tire moving about 1/4 turn when I heard the crunch, the dog was thrown backward and we were both showered with glass.  The hit knocked me into the intersection a bit further but I knew at that time no other cars were coming so I continued across and pulled over and stopped. 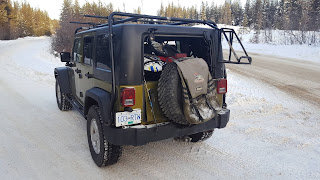 I jumped out of the Jeep and went running to the pickup to see if everyone was alright.  They were and we later found out the truck suffered at most a scratch or two of damage.  At this time I also had the driver of the Rav 4 jump out yelling "he hit you, you were stopped" I was thinking in my head "no shit" but realized it was just his statement as a witness should I need assistance with insurance.

Luckily in all this the driver of the truck was cooperative and admitted fault, we exchanged information and were on our way.  The jeep drove fine, a little cooler with the rear window missing but that was it.

When I got home I used the Dial a Claim service and gave all the details to ICBC.  They instructed me it was pretty clean cut and to take it to a shop of my choice.

The next day I took it in to a shop near work that snapped a few pictures, and booked me in for later that week for the repair.

I returned to that shop with the Jeep later that week, and dropped my pride and joy off.  About a week later I received a call from an adjuster saying that it looked like the Jeep was going to be a total loss as the cost to repair was approaching the value of the vehicle.  After seeing a few recent posts about dealing with ICBC on the forums I knew to ask about the valuation for aftermarket parts and owner retention.

Our conversation went back and forth a bit, they said the only aftermarket part considered was the rack for which they included an extra $30.  I explained how I recently put on a bumper and winch as well as re-geared the axles.  He said I was free to remove the bumper and winch since it was not included in the evaluation, but the gearing is an owner specific modification that didn't increase the marketability of the Jeep.  I disagreed with that but wasn't going to argue.  I hastily made the decision that I would keep the Jeep as salvage and they could deduct that from the payout.  The adjuster was going to finish the paperwork that afternoon.
A few minutes later he called back and asked about the re-gearing, saying they might be able to include 'some' of the expenses as maintenance bumping the value up $1000 and justifying a fix.  I declined, as I didn't really want a jeep with such a large repair. He proceeded with the paperwork as originally planned and in a couple days later I had my Jeep back as well as a check exceeding what I had paid 3.5 years prior.

I then started simultaneously stripping the Jeep and reverting it with stock parts were possible, as well as checking classifieds for my next rig. 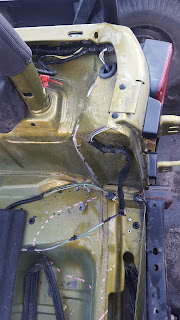 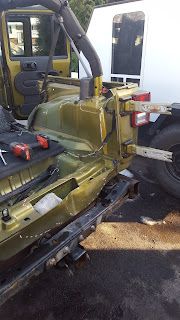 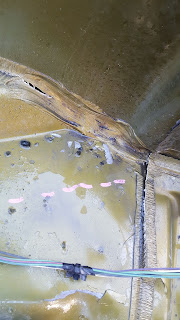 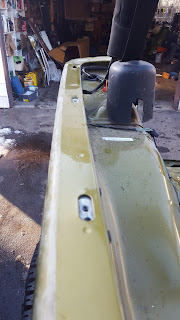 My budget was kind of up in the air, I had some big decisions to make.  Do I buy an equivalent Jeep? Do I try find a rubicon? Do I buy a post 2012 for the better engine and go back to making payments? I had my brother test drive one jeep for me with low kms but just not what I wanted.  I found another one well under my budget locally that seemed promising.  It wasn't my preference for trim and color but after a few days of thinking it over I gave the owner a call and arranged a viewing.

For me I ended up breaking the decision into 2 classes of vehicles assuming average condition.  Either I buy an 07-11 with the crummy 3.8 and a manual transmission or I buy an 2012+ with the 3.6 which could have either the manual or automatic.  For the latter I most certainly would need to finance at least a part of it. I also kind of eliminated a Rubicon model since they would only have up to 4.10 gears and I would be 'wasting' my re-gear, besides I would almost certainly be paying a premium.  I started building this potential vehicle up in my head.
Posted by Okanagan Overland at 21:23

Email ThisBlogThis!Share to TwitterShare to FacebookShare to Pinterest
Labels: Ramblings