Spring 2017 I made investment in our camping/overlanding experience with a 12v fridge. Everybody I talked to with them, or read about them, call them a game changer, and I really wanted to see for myself if this was true.

I'll apologize in advance that this post is about a year and a half late so some details may be lacking, however I am happy to answer any questions as always. 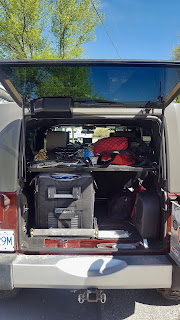 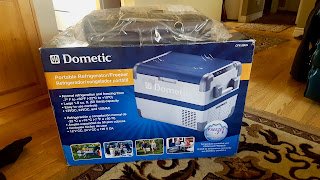 First step was deciding upon the fridge.  I happened to be at Peden 4 Wheel Drive the day of an openhouse and overheard the salesman talking to another customer about the Dometic fridge, while I don't remember all of what was said I was pretty much sold on this fridge.  I also did my own research as well and saw basically nothing but good reviews for this fridge.  A couple of the features I specifically like are the quality compressor that is used, the multiple voltage cutoff options, and the interior light.

I also learned that the internals are the same as the ARB fridge which is actually manufactured by Dometic, this is visually apparent as the control panel is the same.

Ordering the fridge from Peden was also awesome as it was on sale, and included the free transit cover. Shipping was quick and reasonably priced via Greyhound. 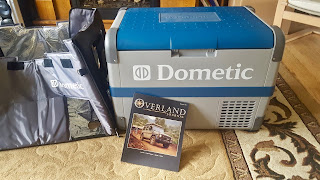 It just so happened that pretty much when I got the fridge I also got an Overland Journal magazine with fridge reviews, the Dometic fridge place well, so I felt good about my decision.
I settled on the 50 quart size (CFX 50) which is great, it allows for ample room for food and drinks.  I'd say that if planned properly you could probably fit a weeks worth of refrigerated items for a couple people.  We probably could have gotten away with the 35 quart which I like because it opens from the end rather than side, not to mention a smaller profile.

I used the fridge a view times without mounting it within the Jeep and it was awkward to say the least, especially since I have the cargo shelf that I built. I'd have to slide it out to the edge of the jeep while awkwardly supporting it on my knee as I accessed inside. I really lucked out when I started the slideout build as I had positioned the shelf just high enough that I had the perfect amount of space to clear. (I originally positioned this shelf with the horizontal line in the rear seat upholstery. 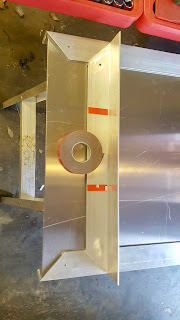 I got a sheet of aluminum cut to size, as well as a length of aluminum angle. I assembled the tray with some double sided tape as well stainless cap screws.  I also put 4 U-bolts near each corner to accommodate tie straps and keep the fridge that much more secure. 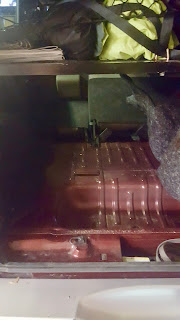 Now that the tray is made it was time to mount it. Looking at the back of the JK it is clear that the task was not going to be simple as the floor is so intricate.  I wanted a semi-permanent install which meant hard mounting each corner. 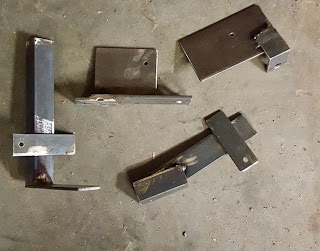 While I don't have any pictures of the finished mounts here are the 4 tacked together. Going clockwise starting on the far left we have the rear most left (driver) mount that mounts up against the pinch seam.  Next is the left hand front most mount which secures into the floor in 2 spots.  The next is the right front mount which bolted to factory hardware. Finally the rearmost right mount, which is the most complex it actually bolts into the storage area more or less vertically. The combination of these mounts makes for an exceptionally secure rattle free install. 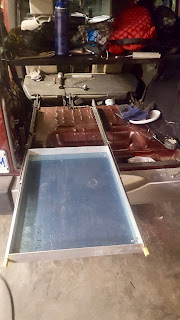 The tray all setup, I used double locking, full extension, drawer slides from Lee Valley.  These slides are rated for 400pounds, so stout to say the least.
Note the placement of the slides, while I wanted the fridge over to the left as far as possible there is a door latch and a body seam to contend with, at first this space really bothered me as under utilized, however I have found that a small folding table nests in there perfectly. This slight gap also helps allow for adequate cooling for the fridge.

I'll say that the fabrication and cost of this tray was a lot more than I was expecting, I'd probably just buy the slide out next time as it is not as bad as I would have expected. (My dad, who bought a fridge after me got one with his purchase and made the install much easier as he could just tie it into the seat hardware.)

For power I repurposed some old subwoofer wiring that was running power to the previous owners aftermarket secondary subwoofer.  I then bolted a 12v power port to the shelf I had built. This works well and I use bungees to secure the excess power cord.  I also have a Hella style plug that I picked up at a sporting good store going out of business that I will likely use specifically for the fridge leaving the 12v accessory port for auxiliary charging.

The fridge was also a gateway modification because as well as it worked there were times that it would run the battery down until it cutout.   I wanted to make sure I could run it as long as possible without starting the Jeep, without risking a no-start situation somewhere out in the backcountry.  As a temporary measure I bought a portable jump starter however had basically made up my mind that there would be dual batteries in my future (another blog post).

A picture of the finished product 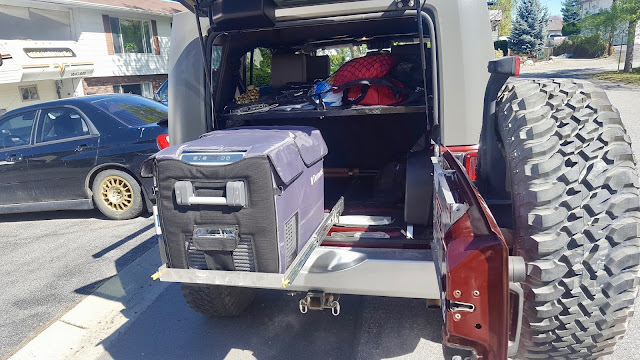 As good as this fridge is there are a few little things I wish I could change, none of these however would make me change my mind if I were to do it all over.

- Better insulation in the lid.  In the heat of the summer it is apparent that the lid is a week part of the fridges insulation, its easy to feel the coolness through it.

- Cover that opens with the Fridge.  Getting into the fridge with the transit cover is a little little tougher than it should be since it opens in the center and a piece flips backward and another forward before the lid can be opened sideways.

- Voltage display, the fridge already has the ability to monitor voltage for the cutoff, and an LCD to display temperature, surely it couldn't have been too hard to display the battery voltage on rotation, or at the push of a button.  I'll likely install something to monitor voltages myself.

- Better quality transit cover, mine started ripping within a few uses on the inside foil, I feel this was mostly my fault for not carefully releasing all the velcro before trying to pull the cover open.

I can confidently say that I can agree with others when they talk about a fridge being a game changer.  I don't think I could ever go back to a cooler and ice.  If this fridge were to break I would absolutely order another in a heartbeat.  I also feel I have probably directly or indirectly sold at least 4 other people on a Dometic fridge as thats how many people I know have bought them after seeing mine and hearing me rave about it. Before this I didn't know anyone personally with one.

Despite the improvements that I wish were made it is still a great device.  To help combat the lack of insulation in the lid (and around the fridge as per the Overland Journal review) I have added additional insulation (may post up about it later). I don't plan on doing a quantitative evaluation before an after, but I feel any additional insulation will be of benefit.  Even before the added insulation one time after a trip this fridge had lasted about 7-8 days on the low voltage cutoff setting while in the garage.  This was where I was not accessing the fridge or Jeep in this time however once the fridge did finally cutout (on the lowest setting) the Jeep would not start.

I would recommend getting the transit cover as it will not only protect your investment but add additional insulation.  It also had 3 pockets in it (2 on the side and 1 in the front) that I've found had many uses from storing utensils, sticker and business cards, to my favourite use of storing wet naps so you can wash up prior to a roadside meal. The front pocket can also hold a small device while recharging it from the USB port.

Posted by Okanagan Overland at 10:31

Email ThisBlogThis!Share to TwitterShare to FacebookShare to Pinterest
Labels: All Reviews, Built Not Bought