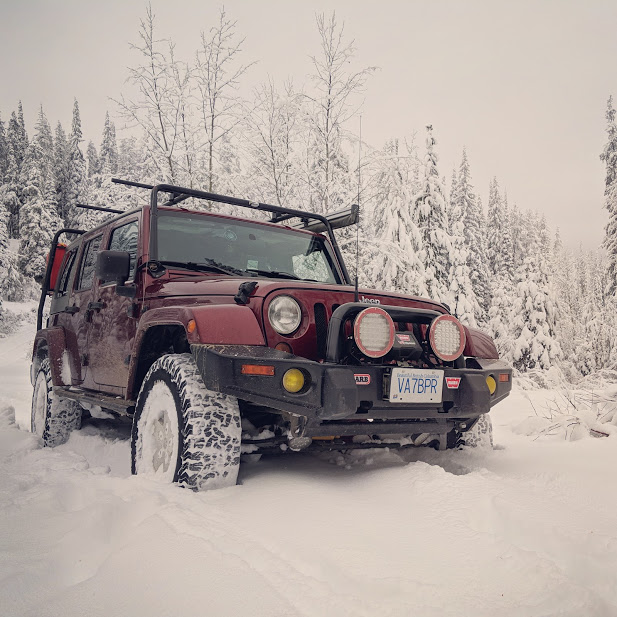 For years I have been using my Baofeng handheld radio for listening in to amateur radio communications, whether I have been volunteering at a rally race or out in a group of Jeeps.  It was these outings with friends wheeling that I started wanting my amateur radio (ham) license so I could legally take part in the conversations. After learning that a few acquaintances had enrolled in a 12 week course early last year I decided that would be the perfect time for me as well.

Taking a course was also secretly a way for me to justify buying a better radio and doing an install in the Jeep to have it for once I passed the test.  Once I started researching I found the options to be overwhelming and it was hard to pull the trigger on a radio as I didn't fully understand all the options each radio would have.  Because of this I ended up not buying a radio and just using my old, cheap handheld, while out on the trail.

Since acquiring my radio license the decision to buy and install a mobile radio was always nagging at me so as the year ended and I had to take some time off from work to use up vacation. I felt it would be the perfect time to buckle down and focus on a radio purchase and install.


For me I like clean installations of electronics and other modifications, I like everything to look like it was designed to be there so while they are a little more expensive I really wanted a radio with a remote head.  With this in mind I researched online and originally thought I had decided on an Icom IC-2730A however for not much more the Yaesu FTM-100DR had a better screen and APRS.  The trouble with the FTM-100DR is that as I understand it (and I'm no expert so could be wrong) that using APRS you would not be able to transmit or receive simultaneously for communication.

I had almost made peace with the Yaesu FTM-100DR limitations and was about to place my order when I noticed that the FTM-400XDR was discounted by $200 making it only about $150 more.  After talking to a friend who owns the FTM-100DR he stated that presented with this discount he would go with the FTM-400XDR. This was enough to help me to justify to blow what I planned to spend in my original budget. 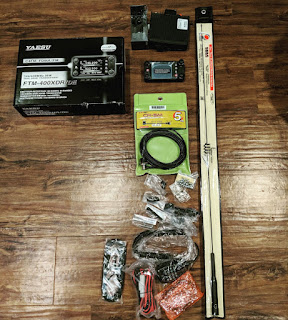 To me the real reasons to select this radio were:

I ordered the radio, antenna, and coaxial cable from GPS Central and had it delivered within a few days. They seem to be the go-to source for radios in Western Canada.


I think the majority of Jeep owners who have a radio with a remote head tend to mount the radio body under the front seats.  There are lots of great resources online for this type of install including youtube videos such as the one by Trailrecon. I had a couple problems with this strategy for an install on my own Jeep.

1. The first issue is that I already have Bestop secure storage drawers under both of my seats.

2. The second issue was that I didn't want to add any vulnerability, should I be pushing the Jeep to the limits for which it was designed. eg. having water ingress through the doors when fording water. Not to mention the notorious roof leaking, which so far I have been able to avoid with frequent cleaning of the seals and careful freedom panel installation.

Another friend with a Jeep had told me years ago about his radio install under the dash on the drivers side.  I know he had a writeup somewhere online but for the life of me could not find it, or any other instructional write up.  After taking a peek under the dash I understood the concept and knew I could figure it out. 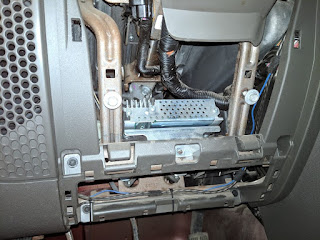 The radio will end up mounting on the same tray as the factory amplifier. To start I pulled off the kick panels exposing the tray and amplifier.

Next I disconnected the factory amplifier (I assume thats what this is anyways) and pulled out the bolt at the front.  The tray and amplifier lifts up then then pulls out as one nice unit. 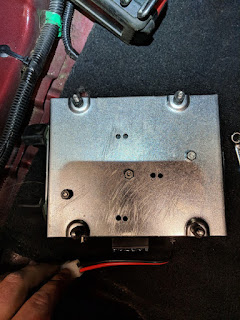 Next up was trying to figure out what orientation to mount the radio in.  Originally I wanted it facing toward the driver for easy access to the USB port and micro SD slot by simply pulling off the lower panel.  I tried drilling several sets of holes in order to find a suitable position but was not successful. I ended up mounting it sideways with the front of the radio facing the center tunnel of the Jeep. I can still access the SD slot and USB should it be needed but its a little more tricky and I need to lay on the floor to do it. (Thinking about it now as I write this I may have been able to get away with the radio facing towards the driver if I had spaced off the radio mount from the tray.  Something to explore in the future perhaps...) 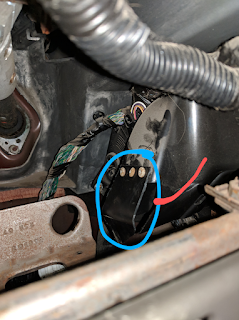 The one concern I had with this mounting position was its location next to the heater vent intended to blow air across the drivers feet.  Since there was a baffle which would directly blow air directly at the face of the radio I ended up cutting this baffle out and then screwing the cut plastic back onto the vent as a shield for the radio. I may get creative in the future but for now this should keep the radio from overheating when I have the heat cranked or being filled with dust due to this Jeeps lack of cabin filter.  I tried taking a picture to better describe what I had done.  Circled in blue was the baffled that I cut out of the duct and screwed on to keep the air going down instead of across. The red represents the orientation that the baffle was in directing air sideways across the drivers feet.   Just keep this in mind if doing a similar install and decide if you too want to make any modifications.

Regardless of the mounting orientation the amp will need to be spaced off the tray so that there is clearance for the nuts attaching the radio mount.  Like with my Redarc BCDC I used small pieces of fuel line as spacers. At each step I checked clearances with the steering column, but had no issues. 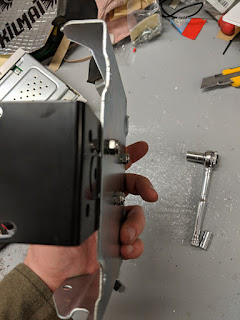 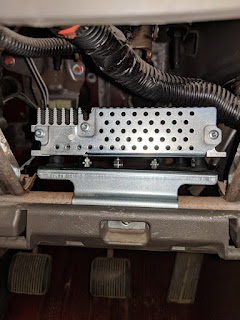 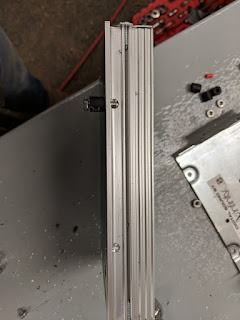 I also had to clearance the amp ever so slightly to allow for the longer bolts I used. To create this clearance I just drilled into the amps aluminum case from the side slightly. Picture to the right shows with bolt installed at the top, and what it looks like without a bolt below. 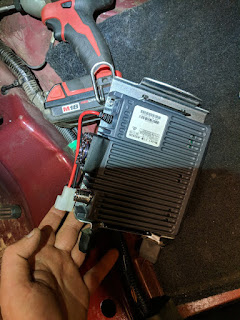 Once the mount had been mocked up it was a bit of a puzzle on how to get the assembly installed in position as it was too bulky to slide in in full.  If I recall correctly I was able to bolt the radio bracket to the tray, then install the bolts and spacers for the amp. I then installed the radio to the bracket and slid the whole unit into place through the dash.  Once that was complete I was able to carefully slide the amp in overtop and start all the bolts.  I then had to tighten each down, any way I could. I think I ended up switching between a socket with an extension or an opened ended wrench depending on the bolt. One benefit to this is it would make the radio incredibly hard to steal. 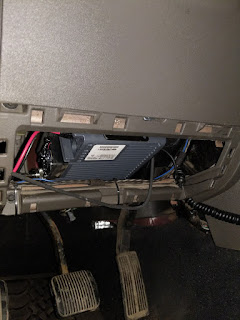 Not pictured but I ran the power from the radio up behind the dash and through the hole on the cowl into the engine compartment.  I encased the wires in loom for a cleaner look and ran the positive and negative both directly to my house battery (see my other writeup on the dual battery install).

The picture to the right is the radio fully installed and the one dash panel reinstalled, when the lower panel is installed the radio is completely invisible. Note the wire hanging down is the one for the remote head it will be fastened.  Also since the mic must attach directly to the radio body I have the mic cable secured to the crossmember with zip-ties to relieve stress on the connector.  I have since ordered a mic extension cable so I will relocate this in the future. 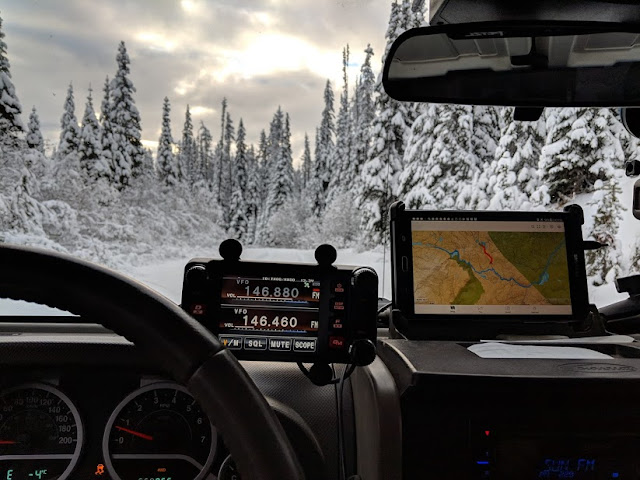 For the head I have temporarily mounted it just using an Ram mount above the dash.  I figured I would be playing with it a lot initially and wanted it somewhere easy to see and easy to reach.  Eventually I will mount it up over head if I can somehow make room near my switch pod. I also haven't included an pictures of the wires or routing as this is still a work in progress, I simply have the wiring running from the main body of the radio up over the dash from behind and the excess bundled at the side of the dash.

Next was running the antenna wire, I tried running this as far from any existing power wires as I could and I tried keeping as much distance between the antenna coaxial and the ECU.  I didn't quite keep the recommended distance called for in the radio's manual but I see that other installs which mount the antenna on the hood would have the wires in equally close proximity. 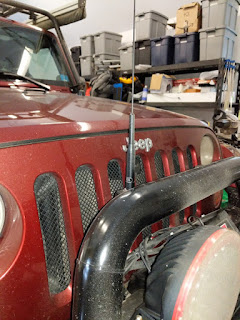 For the coax cable I needed to cut the radio end off to be able to thread this through the small firewall hole.  To have a new end installed I was able to take the Jeep to Omega Communications here in Kelowna who quickly had me setup again and a new connector, and were able to ensure the antenna was tuned sufficiently.  No adjustments ended up needing to be made.

For my antenna I decided to mount it to my ARB bumper, I have always like the Australian touring look as is evident in choosing the ARB bumper to begin with.  Unfortunately for VHF/UHF all the antennas are fairly light wire so it still doesn't have the big Firestik type antenna look.  I needed a step drill to slightly enlarge the hole in the bumper to accept the antenna mount.


Once everything was hooked up I installed the fuses back which had been temporarily removed and fired up the radio.  Now I can't comment much on my radios performance vs another on a similar Jeep, but the people I have talked to in close proximity can hear me clearly, and I seem to get pretty decent reception listening in near and far.  All I can say is that this install was as clean as I had hoped, and so far I have been thrilled with my choice of radio even though I haven't even started to scratch the surface of what it can do.

Posted by Okanagan Overland at 13:36