When using a fridge in your rig you start realizing just how valuable the 12v capacity of the truck is. Driven by this it has always been my desire to install dual batteries, not only does it it give you additional capacity while not on the move but it also gives that added security out on the trail or at a remote solo camp that you can jump start yourself.

There are a few kits out that there that supply all the parts needed to set up a dual battery system in your Jeep.  Some of these kits, like the Genesis Offroad one have rave reviews and provide all the components most people need to accomplish a clean install. I however decided to make my life difficult as I wanted to base my system around a REDARC BCDC rather than just a simple solenoid. 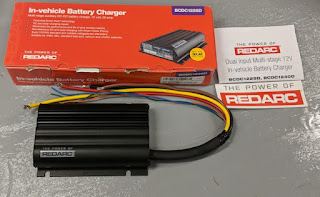 I chose the REDARC BCDC for 3 main reasons, the first and most superficial is that I have always tried to have an Australian inspired build.  I like the 4 wheeling culture and components that exist Down Under, you'll see this in my ARB, OME (Old Man Emu), Maxtrax, and now REDARC components.  This seems to be a respected brand in that market and the standard that all high end builds are using.

Secondly, I wanted to treat my batteries with respect and I didn't want to be restricted to 2 of the same batteries if I didn't want to.  Basically whether you have an isolator, or just have both batteries wired in parallel, when the Jeep is running and both batteries are receiving power they are being treated as one bigger capacity battery.  I don't claim to be an expert on the ins and outs of the alternator charging theory of the JK but it seemed to me that unless both batteries were identical (including state of charge) one would either be stressed (overcharged), or under charged which could also risk premature failure.

Since this is a charger rather than a solenoid it is taking the power from the battery terminals while the alternator is producing a charge, and producing a controlled output of voltage an amperage depending on battery chemistry and state of charge. This allows the truck and alternator to almost be unaware there is even a second battery and no stock systems are disrupted.  Another good point on modern vehicles with computers controlling everything and susceptible to electronic fluctuations.

Thirdly, we use the Jeep for camping a lot and this charger (BCDC1225D) allows for solar input.  While its great to be out always exploring some days just end up being lazy days chilling around camp.  Being able to eventually setup a solar input to the Jeep will be amazing to keep the beers in the fridge chilled without relying on running it.  In fact this charger is smart enough to take what it can from solar before supplementing with alternator power if you have vehicle mounted panels. 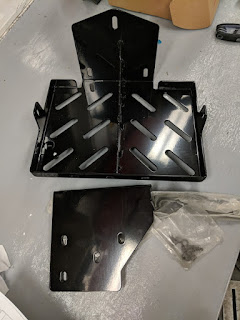 Ideally I would have liked to use the Genesis Battery tray as it seems to have great reviews for fit and finish.  I also like that it keeps the batteries away from the engine and will work for all years of JK whether you have the 3.8 engine like I do, or the 3.6 engine.  I had thought I had seen the tray only available from some American sites, however I couldn't find it from any of the Canadian sites and didn't want to risk duty and brokerage.  It was also at a premium price for just the tray.

This forced me to start looking at the usual suppliers and I eventually found this Rugged Ridge tray that had decent reviews, and was a good price. I had had good luck with the rugged ridge hood latches so figured I'd give it a shot.

So now the fun part.... I'm not documenting this as a whole step by step install, mainly because I did a fairly poor job of taking pictures but I will describe the high level detail of my install. 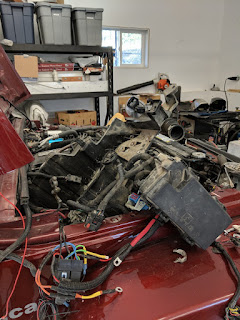 The first step is to start dismantling items attached to the plastic tray running along the passenger side of the jeep, this includes removing the battery, the airbox, the TIPM (Total Integrated Power Management), as well as moving the power steering reservoir out of the way. After all this is complete remove all the 10mm bolts holding the tray in. 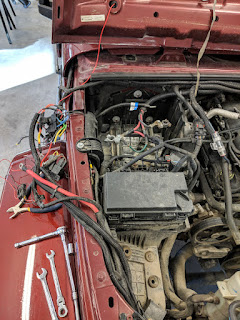 Note that there is a fastener in the wheel well that needs to be removed as well.  While the bold from the top seems to secure the tray and thread into an attached mount in the body this faster on the bottom will need to be removed to allow the bolt come out.  I'd recommend removing the wheel well side first as I ended up breaking this bolt the second time I tried to remove it.

*Note in the picture on the right, just how much aftermarket wiring has been run on the passenger side of the jeep. 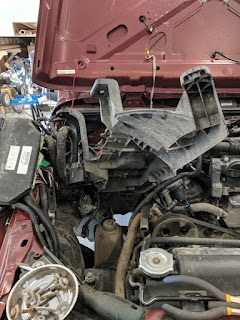 With all these items removed or loosened you can carefully fish out this big plastic tray.  This will be cut later to preserve parts of it while adapting to the Rugged Ridge tray. 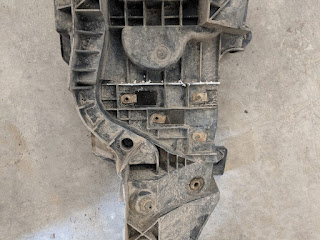 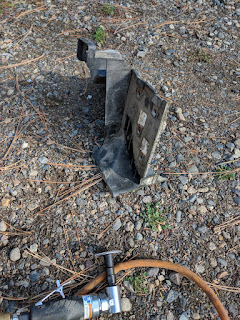 Once the tray is removed mark out the line as described in the instructions to cut on, you can see here I marked along a structural rib, that I preserved to act as a natural transition. I made the cut with a hacksaw as this tray is incredibly easy to cut. I did have to remove the blade to complete one small section.  After cutting I used a small die grinder to just clean up the edge. 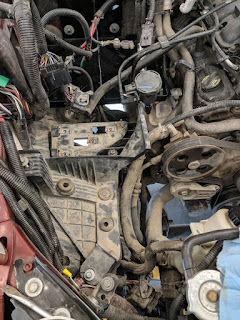 At this point the re-assembly can begin! First install the battery tray, and the plastic piece that was removed, then add the second piece of the battery tray layering it over the plastic and starting the 3 bolts from within the battery tray.  Then place the TIPM mount back in place and secure all the bolts.  I carefully lightly tightened the bolts to make sure everything fit nicely without stress before doing a final torque. 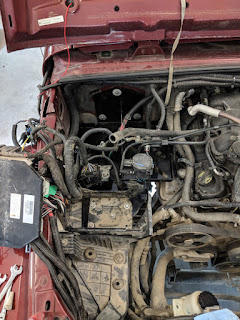 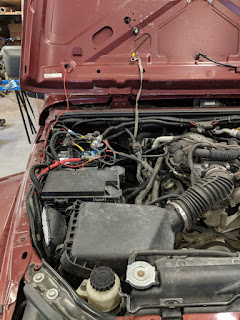 Here is a picture of the tray installed and a single battery test fit.  I did have to omit the use of the washers on the 3 bolts attaching the 2 part of the tray together as there otherwise was not enough clearance for the battery to sit fully in the tray.

Next up was dealing with wiring, notice in my starting pictures just how many wires were running up the passenger side of the Jeep, these were from the winch, the LED lights, and rock lights, as well as the wiring harness for the ARB bumper.  The LEDs and the rock lights had relays at the firewall by the battery.  Also connected to the battery was the wiring harness from the ARB compressor. Finally there was the old subwoofer wiring that I have been re-using for my power to the rear of the Jeep. 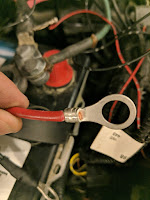 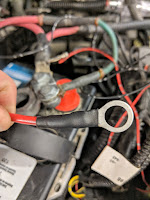 While I would argue the wiring was all done fairly well in terms of reliability and quality, it wasn't very pretty.  Earlier in the spring I had bought a fuse/relay block and had my dad fabricate an aluminum mount for it. I'll take the opportunity to clean up some of this wiring over to that however the writeup will be separate from this.

What I did do right now however was to shorten the stock ARB harness as I think I was running it stock length with a couple feet of excess wire tucked away.  I also replaced the ends on some power, and ground terminals to uninsulated connectors with shrink tube, rather then the red/blue/yellow ends that are typical with hardware store wiring supplies.  I think that the heat shrink tubing looks a lot more professional, as well as I used the double walled adhesive lined stuff too so should be more corrosion resistant.  I opted for this project too to replace my cheap pair of crimpers with some better ratcheting ones. 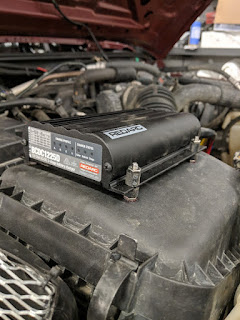 Next up it was time to mount the BCDC charger. I was originally going to build a mount on, or around, the batteries however the area is too cluttered with wiring.  I instead went with the easiest solution which was to mount it to the flattest part of the airbox.  For this I marked out the 4 holes of the charger and drilled the airbox, I then ran some stainless bolts up from inside the airbox, and threaded on some nuts with red Loctite from the top.  I did this as it would make it easy to remove the charger if needed, as well as I didn't want anything that could fall into the clean side of the airbox and risk it going into the engine. I then used some fuel line to space the charger off the airbox.  I did this since the surface isn't flat and also to provide airflow underneath. 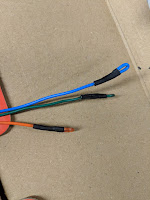 The charger has a few small gauge wires that won't be needed for my application, at least right away so I capped them off.

I don't have any pictures of it, but the next step was to extend the 8 gauge wiring of the charger to the batteries and to the ground.  Speaking of the ground there is a conveniently located ground on the firewall where the ground strap is placed with a long stud.  I used this to ground the secondary battery as well as the charger. REDARC also recommends the use of MIDI style fuses, I ordered a few 40amp ones as they seemed hard to come by in town.  The holders in town are also quite expensive, so I ordered a few online.  Since I was anxious to have this setup I just bolted the terminals direct to the fuses and shrink wrapped the whole thing. 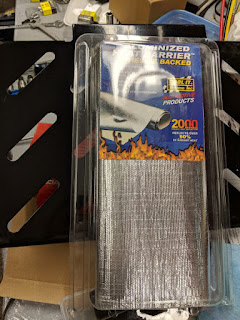 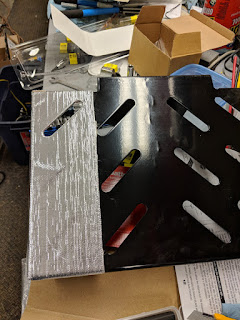 After the initial install of the tray I was worried that the heat from the manifold could end up being a problem, or at least wouldn't be ideal for the battery.  I ended up ordering some aluminized adhesive heat shield.  I pulled the tray back out and I stuck some on the tray where it sits over the exhaust manifold and cut out the slots in the bottom of the tray.  Also not pictured but I took and added some foam tape to the bottom of the trays so the batteries didn't scratch through the finish.  Finally I also took some fuel line an placed it down the centre rib of the tray to protect it from being damaged when installing the batteries.  These measures were made to try help prevent rust.
Lastly its just a matter of getting both batteries in position bolting them in as well as reconnecting the wires as cleanly as possible (I probably still have some room for improvement for another day). 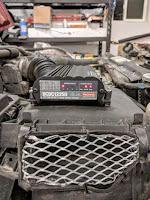 Here is a picture of the charger powered on the first time running the Jeep after the install. Note the LED on the far right is a representation of the status of the charge, one of the small gauge wires can be used to bring this into the cab to keep tabs on how things are charging. 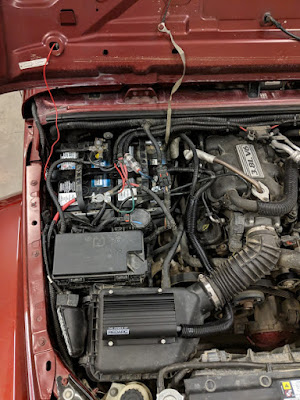 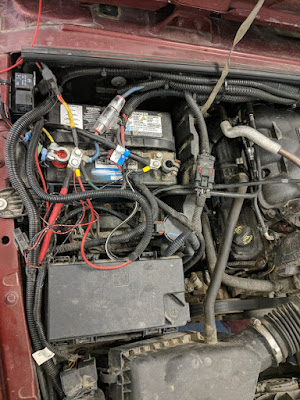 Below are my amazon affiliate link to some of the components to complete this install.  Note that using the links below helps me get a small kickback when a purchase is made.

Posted by Okanagan Overland at 22:21